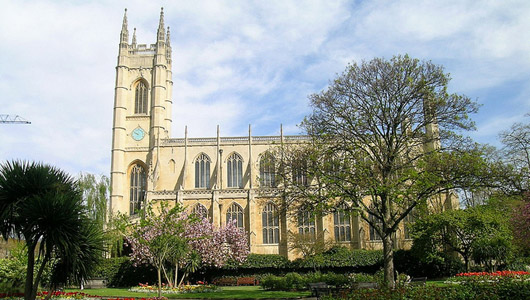 This church was consecrated by the Bishop of London on St Luke’s Day, 18th October 1824 and was built because the original parish church (now known as Chelsea Old Church) was regarded as too small for the increasing population.

The decision to build it was made at a public meeting in 1818 and the foundation stone was laid on October 12th 1820. The Rector at the time was the brother of the Duke of Wellington, the Hon. & Revd Gerald Valerian Wellesley DD. St Luke’s is regarded as being one of the first Neo-Gothic churches to be built in London: the nave, 60ft in height, is the tallest of any parish church in London and the tower reaches a height of 142 feet.

The architect was James Savage, one of the foremost authorities on medieval architecture of his time, and the church has a grandeur of conception and a great attention to detail.  It is built of Bath stone and the resemblance to King’s College Chapel in Cambridge is quite striking. On the exterior the flying buttresses and the pinnacles along the parapets give an added feeling of height.

Despite it being a building of Gothic style, the interior was laid out in the traditional 18th century way of a preaching house, with an enormous pulpit and pews everywhere and a diminutive altar. This arrangement was altered in the late 19th century to substantially what it looks like today. Indeed the present late 19th century rearrangement actually fits the length of the building better than the original “preaching house” concept.

The east window was installed in 1959 to replace an older one destroyed during the Second World War. It was designed by Hugh Easton and is in honour of The Trinity and The Church, and features many emblems of the saints. There is a plan in the Church Guide Book.  The total area of the window is over 500 square feet.

The Coat of Arms

Above the west door are the arms of George IV, and the arms of the Kingdom of Hanover are superimposed on the British royal arms.

This fine instrument was built by John Compton in 1932, and incorporates some of the original 1824 organ. The organ of St Luke’s served as the prototype for the organs at Broadcasting House and Downside Abbey. Click here for more details.

This painting behind the altar, which was placed in the church soon after it was built, depicts the deposition of Christ from the cross, and is by James Northcote (1746-1831) who was well known as a portrait painter.

The two large sculptures in the niches on either side of the high altar are representative of Adam and Eve at the fall of man in the Garden of Eden. The two figures bow their heads in shame for their disobedience to God. The figure of Adam is carved from Imperial Porphyry and Eve from Hammamat brecchia. These modern sculptures were installed in 1997 and are the work of Stephen Cox, who also has work in the Tate Gallery.

There is a ring of ten bells in the tower, which were cast at Whitechapel when the church was built.  They are rung regularly.

Along the south side of the church you will find the PFFA Chapel. This chapel, which is used daily for prayer, is a memorial chapel to the Punjab Frontier Force, which was based in India from 1847 to 1947.

There are many memorials to local people around the church and of particular note are those to the Cadogan family who remain Patrons of this parish. On the east wall of the north gallery, the memorial to Lt. Col Henry Cadogan, who was killed in 1813 in the Battle of Vittoria, is by Sir Francis Chantrey. To the left of the altar there is the memorial to Luke Thomas Flood, who died in 1860, having carried out many charitable works in Chelsea.  His name is perpetuated in Flood Street.

St Luke’s is built on a labyrinth of crypts in order to provide better foundations on the sandy soil. The crypt is now used as a series of offices.

The large burial ground which surrounded the church was converted into a public garden in 1881, the gravestones being placed to form a boundary wall.

Charles Dickens was married here on 2nd April 1836 to Catherine Hogarth, eldest daughter of George, who was editor of 'The Evening Chronicle' in which Dickens’ Sketches by Boz appeared. Catherine Hogarth was a Chelsea resident at the time, and the wedding took place two days after publication of the first part of the Pickwick Papers.

John Goss, who wrote the hymn “Praise, My Soul, the King of Heaven” and the carol "See Amid the Winter Snow", was organist here as was John Ireland who wrote the well know hymn tune "My Song is Love Unknown".

Charles Kingsley, who wrote The Water Babies, was associated with this parish, of which his father was rector from 1836-1860.

There have been ten rectors since the first rector the Hon. G. V. Wellesley, who was appointed in 1805 and who built the church during his incumbency, which lasted until 1832.