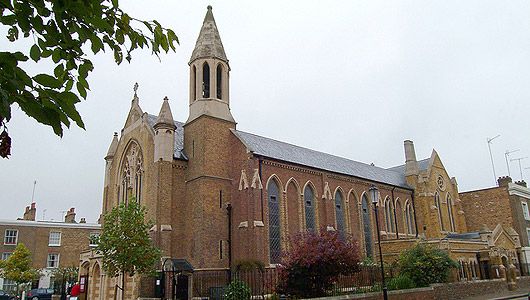 Christ Church was consecrated on 26th June 1839. It was originally a ‘Chapel of Ease’ to the parish church of St Luke’s, Sydney Street, but was given its own parish in 1860.

In 1839 Chelsea was still an independent village separated from London by open countryside; however, there was pressure for development, particularly for the construction of streets of small cottages to house the numerous servants who were employed in the grand houses on Cheyne Walk and in the newly constructed streets and squares of Belgravia and Hans Town.

It was as a church for these working class people that Christ Church was built and it was designed to accommodate the maximum number of people at minimum cost. The construction cost was just over £4,000. (St Luke’s Church, built 15 years, earlier cost ten times this sum.)

The site for the new church was part of an extensive area of land used for market-gardening, just off Flood Street, which was then one of Chelsea’s main shopping streets.

The plan of the church was traditional, comprising nave and aisles, but with a gallery over each of the aisles and also over much of the west end. The interior was dominated by a centrally positioned three-tier pulpit; the altar was behind it as the majority of services would not have included Holy Communion. There was no special place set aside for the choir; they sat in the front rows of the west gallery. The church would therefore have been barely distinguishable from a non-conformist chapel.

The cost of building the new church was paid for by the Hydman Trust, the Hydman family having originally made their money in the West Indies, where they owned extensive sugar plantations. The trustees, however, were concerned about the spiritual well-being of the new urban working class emerging in this country and they used the considerable funds at their disposal for the erection of churches.
Soon after its consecration, Christ Church established its own church school. To begin with, premises were rented in Flood Street and the school was for boys only, but by 1843, new schools for boys and girls were erected on land donated by Lord Cadogan, directly opposite the church. The school still exists as a Church of England Primary School.

The church was designed by Edward Blore (1789-1879). In the 1830s, Blore had an extensive and successful practice which specialised in church and country house work. This included restoration work at Westminster Abbey and the cathedrals of Peterborough and Glasgow; he designed many new parish churches, church schools and parsonages, and also a new wing at Lambeth Palace. In 1846, he designed a new principal front for Buckingham Palace, later to be re-faced by Sir Aston Webb.

Blore’s design for Christ Church is typical of his early church work; it is in Gothic style, but not the full-blooded Gothic which came later in the Victorian era. The design retained much of the elegance and symmetry of the Regency period, with its Gothic elements used in a decorative manner.

The Organ and Pulpit

In 1876, Queen Victoria Street was cut through the medieval street pattern of the City of London, with the loss of several churches. Christ Church was fortunate in being given two articles salvaged from these churches, and these are undoubtedly its finest features: they are its organ and its pulpit.

After a long decline the organ, which had been brought from St Michael, Queenhithe in 1876 and altered several times, finally expired in 2007.

Existing plans to renew the organ were rapidly taken forward and the Dutch firm of Flentrop were commissioned to build a new instrument. To our delight they found that much of the 18th century pipework was in excellent condition and also the front of the casework, when stripped of accretions, was particularly beautiful. So a new organ, 2 manuals & pedal, 27 stops, tracker action, with considerable original pipework and contemporary additions was installed in 2009, to the joy and delight of the congregation. This wonderful new instrument came into being through the vision and generosity of many benefactors, whose contribution we gratefully acknowledge. Now, Christ Church's Flentrop organ is used not only for all our services, but also by the Royal College of Music for their advanced organ studies students and as a concert instrument of international renown, having received its opening recital by Tom Koopman. Click here (PDF) for more details on the organ.

The pulpit is typical of those designed for Wren’s City churches; it is characteristic of the famous wood carver Grinling Gibbons (1648-1721) and his school. The pedestal is modern.

By the 1890s the parish had not only become more populous but its social character had also changed. New houses of palatial proportions were erected along the new embankment, Tite Street was in its heyday as an artist’s colony, Tedworth Square was being completed and the old shops and cottages that once clustered around the junction of Flood Street and Cheyne Walk were being replaced with large blocks of mansion flats.

Christ Church, too, was extended and ‘improved’ at this time.  The nave roof was completely rebuilt and the pillars between nave and aisles which, probably for reasons of economy, had never been encased in plaster, were completed, with pointed arches between, but without the capitals shown in Blore’s design. Both the east and west ends were extended right up to their respective boundaries (the church had originally been free-standing on its site) and the tiny vestry on the south side was replaced with two new vestries designed by a little-known architect called J. Arthur Reeve. Lastly, the western gallery was completely removed and the old box-pews, with the exception of those in the remaining side galleries, were replaced with new, more spacious pews. The new west front was designed by W.D. Caroe who, like the church’s original architect, Edward Blore, had a highly successful practice which specialised in ecclesiastical work; in addition to designing new churches and restoring or altering others, he was the architect of the offices of the Church Commissioners at no.1 Millbank, Westminster, and he re-built the Archbishop’s Palace at Canterbury.
During the last century, there were many minor modifications and embellishments to the church, all of them continuing the trend of the 1890s whereby the somewhat basic simplicity of the original building was both re-ordered and adorned. Most have been internal amendments, the only alteration to the exterior being the addition, in 1933, of the entrance porch designed by G.G. Woodward.

Christ Church, though far from being a masterpiece of architecture, dominates the Christchurch Street area. The small friendly scale of this quiet backwater, in contrast to the grandeur of the Royal Hospital and Cheyne Walk nearby, is typical of the unique and special character of Chelsea.

In 1986 the parish of Christ Church re-joined that of St Luke’s to form a new combined parish known as ‘The Parish of Chelsea: Saint Luke and Christ Church’. Each church continues to manage its own affairs and retains the status of a parish church.